Class Screen Class Screen represents a pysical monitor mainly for the capturing process (grabbing a rectangle of pixels from a screenshot). For Multi Monitor Environments it contains features to map to the relevant monitor. Since class Screen extends class Region, all methods of class Region are available with a Screen object.

getBounds() Get the dimensions of monitor represented by the screen object.

Returns: a rectangle object The width and height of the rectangle denote the dimensions of the monitor represented by the screen object. These attributes are obtained from the operating system. They can not be modified using SikuliX script.

All region methods have to be used as someRegion.find(PS), where someRegion is a Region object (or a Screen or a Match object). If written as find(PS) it acts on the default screen being the implicit region in this case (mapped to the constant reference SCREEN). In Multi Monitor Environments this is the primary monitor (use the constant reference SCREEN, to access it all the time), that normally is Screen(0), but might be another Screen()object depending on your platform and settings.

Capturing is the feature, to grab a rectangle of pixels from a screenshot and save it to a file for later use. Each time, a capturing is done, a new screenshot is taken (Screen.capture()).

There is an interactive variant Screen.selectRegion(), that just returns the position and dimension of the rectangle selected by the user interactively.

In the settings of the IDE there is an option, that allows to get a prompt for the imagename (interactive naming).

Interactive Mode: The script enters the screen-capture mode like when clicking the button in the IDE, enabling the user to capture a rectangle on the screen. If no text is given, the default “Select a region on the screen” is displayed.

If any valid arguments other than text are specified, capture() automatically captures the given rectangle of the screen. If valid, a new screenshot is taken and the content of the selected rectangle is saved in a temporary file. The file name is returned and can be used later in the script as a reference to this image. It can be used directly in cases, where a parameter PS is allowed (e.g. Region.find(), Region.click(), …).

selectRegion([text]) Select a region on the screen interactively

The interactive capture mode is entered and allows the user to select a region the same way as using the selection tool in the IDE.

Note: You should check the result, since the user may cancel the capturing.

Save the captured image elsewhere (not temporary)

class Screen capture(region | text, [path, ]name) only available in Python scripting (MUST be used as such undotted)

Works principally the same as the normal capture, but directly stores the resulting image to the specified location. The name spec need not have the .png ending.

If the path specification is omitted, the imagefile is stored in the current bundlepath. In this case the imagename will finally be `bundlepath/_name.png, where the leading underscore is an IDE convention to block the automatic deletion of images, that are not namely referenced somewhere in the script, at the time the script is saved in the IDE.

…on Java usage or in non-Python

The args are according to the above parameter specifications of the two Screen.capture() variants.

If more than one monitor is available, SikuliX is able to manage regions and click points on these monitors. 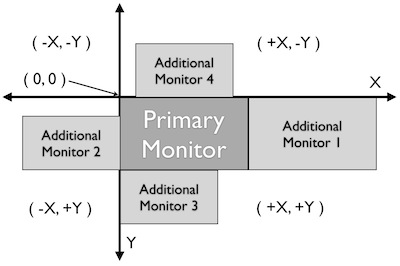 The base is the coordinate system (picture above), that positions the primary monitor with its upper left corner at (0,0) extending the x-direction to the right and the y-direction towards the lower boundary of the screen. The position of additional monitors can be configured in the operating system to be on either side of the primary monitor, with different positions and sizes. So monitors left of the primary will have pixels with negative x-values and monitors above will have negative y-values (left and above both x and y are negative).

At script start, SikuliX gets the relevant information from the operating system and creates respective screen objects, that have an ID (0 for the first or primary monitor, 1 and higher for additional monitors with a maximum of one less than the number of screens) and know the rectangle, they cover in the coordinate system.

How to get the relevant information:

Be aware: Changes in your system settings are only recognized by the IDE, when it is started.

The monitor, that has the System Menu Bar, is always Screen(0) and mapped to the default SCREEN.

With its rectangle, a screen object is always identical with the monitor it was created using Screen(id). Using Region.setROI() to restrict the region of interest for find operations has no effect on the base rectangle of the screen object.

On the other hand region objects and location objects can be positioned anywhere in the coordinate system. Only when a find operation or a click action has to be performed, the objects rectangle or point has to be inside the rectangle of an existing monitor (basically repersented by Screen(0), Screen(1), …). When this condition is met, everything works as expected and known from a single monitor system.

With finding and acting there are the following exceptions:

An interactive capture (the user is asked to select an image or a rectangle via Screen.capture() or Screen.selectRegion()) will automatically be restricted to the monitor, where it was started.

A scripted capture using a rectangle or a region (i.e. Screen.capture( region | rectangle )), will be handled accordingly:

Based on the knowledge of your monitor configuration, you can now start some further evaluations using e.g. Region.hover() together with setShowActions(True) and highlighting using Region.highlight().

The implementation is based on the TigerVNC Viewer package and was initially contributed by Pepijn Van Eeckhoudt.

The intention of the following information is to only describe what is officially supported by a VNCScreen object aquired using vncStart(). For usage of the classes in the package itself you have to read the javadocs or look into the sources.

To make the package more useable there are now highlevel wrappers, that hide the logic to create, start and stop the socket based connection. More than one connection can be used at one time, each represented by a different VNCScreen object.

Start a VNC session to the given (usually remote) running VNC server and on success get a VNCScreen object, that can be used like a Screen object. About the restrictions and special features see the comments below.

In basic operation environments there is no need to issue the vnc.stop() explicitely, because all active VNC connections are auto-stopped at the end of a script run or at termination of a Java run.

USAGE IN JAVA as being a static method in class VNCScreen, vncStart() has to be used as:

Some general information and comments#

These are the rules:

Comment If you encounter problems with a remote Region/Location you think should be remote, but is not (e.g. clicking locally), then this is a bug, that can be worked around using:

Based on the ideas and first implementation of Gergő Törcsvári it is now possible to capture images from an Android device in the IDE and run scripts the same way as with a local screen. You can wait for images to appear on the Android screen and act with taps, swipes and text input. Since the avarage latency for a search operation is about 1 second (varies with screen resolution, region size and device processor speed), this solution only makes sense for basic automation and testing, where speed does not matter.

Most mouse and keyboard actions will do nothing but produce an error log. Android typical actions are available with class Region: tap, swipe, input and it is possible to issue device commands.

If used with a local screen, these features silently do nothing.

How to tell SikuliX, where you have adb on your system#

In all other cases you must specify the complete absolute path to the executable adb.

In the following adb-path is one of the above alternatives:

How to start and use the adb service#

Take care, that your Android device is attached via USB to your system and is setup as accessible (see Android docs).

Now you might use the IDE’s Tool menu entry, to check, whether the device is found and accessible. Of course you might use your own script/program/solution to do that.

AS already mentioned: The Java class ADBScreen is the implementation, that represents the Android device in SikuliX and has the features of a normal Screen object and bound Regions implemented to work towards the device.

To get an object representing the device you either use

Now for the rest of your script/program the variable adbscr represents the attached device and allows to use the implemented features in the normal way as adbscr.someImplementedFeature(...).

To close a connection to a device use adbscr.stop(). This is done automatically when a script/program ends.